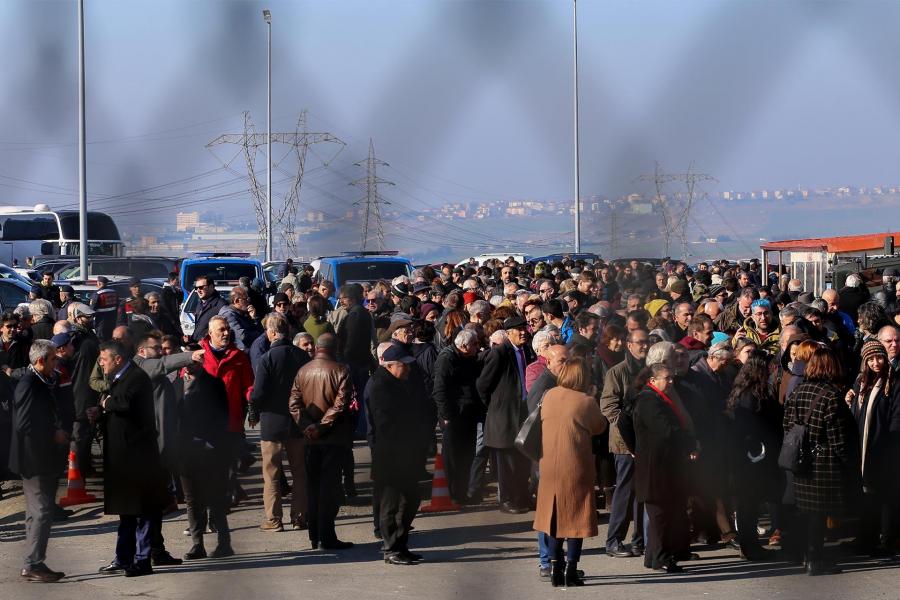 The court panel in the Gezi case gave the verdict of acquitting 9 people and discharging Osman Kavala, the only defendant of the case in detention. The files of 7 people abroad were set aside.

The sixth hearing of the Gezi court case of 16 people accused of “attempting to do away with the government of Turkish Republic,” one of whom has been in detention, has taken place in Istanbul Major Crimes Court 30 in Silivri. The court panel arrived at a verdict. Due to the lack of legal evidence pertaining to committing of the purported crimes by the accused, the verdict was the acquittal of 9 people and discharge of Osman Kavala. The court also decided for the files of 7 people abroad to be set aside and resolved for the removal of the orders for their arrest pending any other legal decision on them.

THE VERDICT HAS BEEN GIVEN

Having reminded that legal proceedings about Osman Kavala, Mücella Yapıcı, Can Atalay, Tayfun Kahraman, Ali Hakan Altınay, Yiğit Aksakoğlu, Yiğit Ali Ekmekçi, Çiğdem Mater Utku and Mine Özerden were started due to “attempts through compulsion and violence to do away with the government of Turkish Republic or to, partially or as a whole, impede it fulfilling its tasks”, “damaging property”, “qualitative looting”, “the unpermitted possession or supply of dangerous substances”, “deliberate cause of injury”, “aggravated injury” and “opposition to the Act of Safeguarding Cultural and Natural Heritage,” the court gave a verdict of their acquittal as “there was not sufficiently concrete or definitive evidence of the committing of crimes accused which would warrant a sentence”. The court resolved to acquit and discharge Osman Kavala.

The court which resolved to set aside the files of Can Dündar, Mehmet Ali Alabora, Ayşe Pınar Alabora, Gökçe Tüylüoğlu, Handan Meltem Arıkan, Hanzade Hikmet Germiyanoğlu and İnanç Ekmekçi, also resolved to quash the order for their arrest. The court issued a warrant for their arrest in order to take their statements.

THE DETAILS OF THE HEARING

Observed by representatives of international human rights organisations, members of parliament, journalists and the public, the court hearing opened with the statement of the prosecutor’s demands. Repeating his deliberation, the prosecutor alleged that all defence pleas are to extend the case and that they should therefore be rejected and that the detention of Osman Kavala should continue.

Kaan Karcıoğlu, the lawyer for Mehmet Ali Alabora spoke first. Reminding the decision for non-prosecution relating to his client’s Twitter activity, Karcıoğlu expressed their wish to analyse the records of phone calls and to look at whether or not the records were tampered with.

Following Karcıoğlu, Evren İşler, the lawyer for Can Atalay, Tayfun Kahraman and Mücella Yapıcı, spoke. İşler said “The witnesses we would like to hear are in the court. It is not the case that there is an attempt to lengthen the hearings. ”

Aynur Tuncel Yazgan, the lawyer for İnanç Ekmekçi, in her speech to the court panel, said “You gave no decision on the evidence I demanded to be collected. If the witness has been prepared in accordance with the Act of Penal Court and if a document has been submitted, the court has to accept. Our witness is here. The witness is a person to be listened to for us, we demand the witness to be heard.”

Hürrem Sönmez, the lawyer for Çiğdem Mater Utku, stated that “The witness about the allegation directed at my client is here, we demand for the witness to be heard.”

The court case resumed after the recess. The head of the court refused all demands on grounds that “It will not benefit the hearing” and gave the floor to Osman Kavala for a statement. Kavala said he wished to speak after the witnesses were heard in accordance with the advice given by his lawyers.

KAVALA: I WILL PRESENT MY DEFENCE ONCE THE WITNESSES ARE HEARD

Speaking about the conditions of his detention, Kavala reminded the vote of opposition given by Zühtü Arslan, the head of the court in the European Human Rights Court and Constitutional Court decisions.

YAPICI: PROSECTORS AND COURT PANELS HAVE CHANGED YET I AM STILL HERE AND STILL IN THE RIGHT

Senior Architect Mimar Mücella Yapıcı, being tried for life sentenced said “I am not going to provide a defence; I provided my defence in the court where I was acquitted.” Demanding extended time for all those tried in the case to provide a defence, Yapici said “I said it to the previous court panel, I am here dear chair, you are changing yet I am right here and still in the right.”

THE HEAD OF COURT RESOLVED TO COME UP WITH A DECISION

The court panel, having refused once again all the defence pleas, announced that they will be opening the hearing to the objections to the court deliberation.

BAYRAKTAR: THE DETENTION OF KAVALA VIOLETES EHRC DECION, IT SHOULD BE QUASHED

Stating that he will not speak against the deliberation, lawyer Köksal Bayraktar said he will speak about the detention of Osman Kavala. Bayraktar stated that “The detention of Kavala violates the EHRC decision, there is a reality before us, human rights have been violated and continue to be done so… Our client has been in detention for the last 2.5 years. This is unacceptable. You should not remain a bystander to unlawful activity and cannot remain so. As stated in the EHRC decision, Kavala should be released ‘immediately’”.

THE COURT PANEL LEAVES THE COURT

Without giving permission to all of the lawyers for the defence to speak, the court panel demanded the tried to provide their final statements. Despite all the objections from the lawyers, the tried were asked to provide their final statements. Özgür Karaduman, a lawyer objecting to this was forcibly removed from the court, upon which when those in court reacted to this with applause, the listeners were demanded to leave the court and decision to this effect was given.

Without announcing a recess, the court panel then left the court.

“YOU CANNOT EJECT THE DEFENCE FROM THE COURT”

Gendarmes with headgear brandishing shields entered the section of the court where the defence lawyers were to remove lawyer Özgür Karaduman which the head of the court demanded be removed from the court; the lawyers reacted by demanding a written decision.

Ali Kenanoğlu, the HDP MP reacted saying “You cannot remove the defence out of the court.” With the objections getting stronger, the decision to remove Özgür Karaduman was overturned despite the demand by the court earlier.

The court panel returned to the court. Having refused the lawyers plea for extension, the final statements of the lawyers were taken and then the court decision was announced.

The decision of the court met the applause of those in attendance. 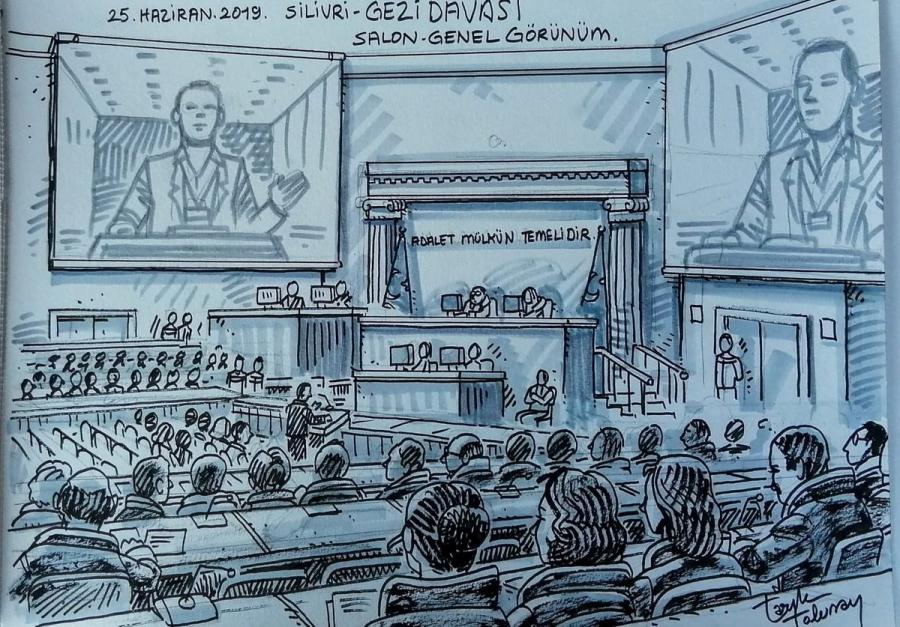 Next
Following signal from Erdoğan, Board of Judges and Prosecutors authorizes probe into Gezi trial judges