The leaders of the ’68 youth movement Deniz Gezmiş, Yusuf Aslan, Hüseyin İnan were commemorated on the 48th anniversary of their executions.

People’s Liberation Army of Turkey (THKO) and the leaders of the youth movement of ’68, Deniz Gezmiş, Yusuf Aslan and Hüseyin Inan were executed by the junta on March 12. They were commemorated by their graves on the 48th anniversary of their death. The Karşıyaka Cemetery, where thousands of people flock every year, has witnessed the memorials made with representative participation and physical contact rules due to the coronavirus outbreak this year.

However, it was observed that many people came to visit Deniz and friends individually as of the morning hours. Political parties and youth organizations made commemoration with limited participation. Members of the Labour Party (EMEP) and the Labour Youth (Emek Gençliği) met at 12:00 at the Karşıyaka cemetery gate with limited participation. From here, by paying attention to the physical contact rules, slogans of “Long live revolution and socialism” were chanted. After the carnations were left on the graves of Deniz and friends, speeches were made.

‘EXPERIENCES ARE NOT RESTRICTED JUST BY THE OUTBREAK’

Speaking on behalf of Emek Youth by the grave of Deniz and friends, Meri Kelleci said, “We know very well that what is happening today are not just problems related to the pandemic! The imperialism, which Deniz and friends strived to destroy, has today become unable to carry itself. The system that hung Deniz and friends has continued to kill a young 20-year-old who had no choice but to work”.

‘WE LEARNED THE STRUGGLE FROM DENIZ AND FRIENDS’

Stating that although imperialism continues to hold the people responsible for their own dilemmas, they have learned how to fight against it from Deniz and friends, Kelleci added that today they have not only commemorated them, but have also increased their struggle. Remembering Deniz and friends, means being amongst the ranks of the working people against the capitalist looting, and amongst the ranks of international solidarity against imperialist barbarism. Kelleci added ‘Commemorating Deniz and friends is to oppose capitalism and the pandemic for the growth socialism’.

‘THE UNDERSTANDING THAT HUNG DENIZ AND FRIENDS IS STILL IN POWER’

Labour Party (Emek Partisi) Chairman Selma Gürkan said that they reminiscent of Deniz Gezmiş Yusuf Aslan, Hüseyin İnan and their lawyer Halit Çelenk by growing their values. Indicating that the understanding that sent Deniz and friends to the execution table is still in power today, Gürkan stated that those who grew the economy through the exploitation of labourers and at the cost of their lives, turned the exploitation wheel for the sake of monopolies during the pandemic.

‘WORKERS ARE THE CANDIDATES TO RESTORE LIFE’

Gürkan, “We saw in the pandemic process that if workers and labourers do not produce and provide services life stops. Those who stop this life are also candidates for rebuilding life. Those who deem the 6th Fleet in Qibla and those who prostrate to the 6th Fleet in Dolmabahçe continue their power for the interests of monopolies.”

TO THE TREASURY MINISTER: WHICH SOURCES WILL YOU MAKE AVAILABLE TO THE MONOPOLIES?

Noting that the Treasury and Finance Minister will hold a closed meeting with the international investment companies in the evening, Gürkan said, “What is this meeting? What resources of the country will be negotiated to monopolize monopolies? Are they going to negotiate to put the working class labour at the disposal of monopolies which they think weakened or silenced during the pandemic process?”. Expressing that this is undoubtedly the framework of the meeting, Gürkan said that how to put the resources of the country under the command of monopolies will be discussed.

‘THE SOCIALISM IDEAL OF DENIZ AND FRIENDS WILL WIN’

Stating that they promised Deniz and friends, Gürkan continued her speech as follows:

“Freedom, not oppression, public sovereignty and power of the people, not a single man. We say this against the system of exploitation and plunder; long live socialism. Long live the fully independent Turkey. Long live peoples’ brotherhood and peace. We know that one day, the ideals of the Deniz and friends, socialism and popular power will win”.

Despite the pandemic conditions, the memorial in Istanbul for Deniz and friends was held in Dolmabahçe, where they pushed the 6th Fleet into the sea. “We will keep our promise to the Deniz and friends, we will enlarge our struggle for independence, democracy and socialism, and destroy the order of those who execute them”.

The commemoration event started with a moment of silence.

In the commemoration of the slogan of “Yusuf, Hüseyin, Deniz; our struggle to continue”, “Imperialists, collaborators, don’t forget the 6th Fleet”, “From Deniz and friends those amongst the ranks of youth labour”, “Youth are the future, the future is socialism”. Emek Youth of Istanbul Provincial Youth Manager Mete Kağan Yıldırım spoke.

Yıldırım, who said that the struggle of Deniz and friends will not be forgotten in the 48 years that passed, said, “Those who hung them, those who passed the string of death, believed that it would be a solution to hang them, but their expectations were destroyed! Deniz and friends have been living in the name, struggle, determination and courage of hundreds of thousands of young people for 48 years,” he said. 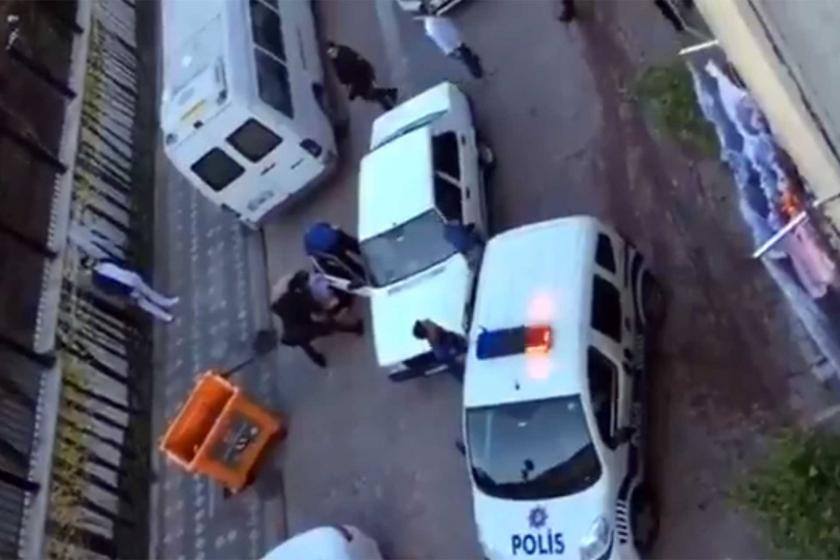 Next
Human rights defenders react to the police violence in Turkey