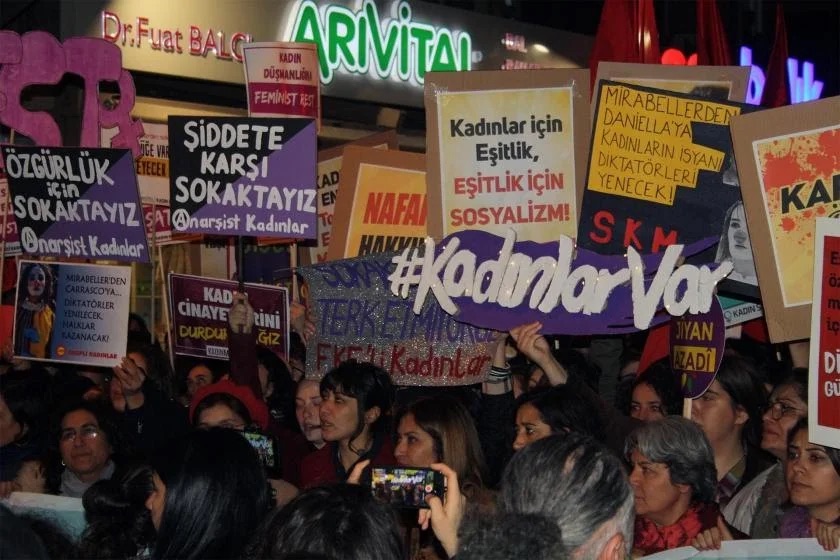 Violence against women and gender inequality have intensified in Turkey in the past year, even as the women’s resistance has grown in Turkey against the relentless attacks on women’s rights and failure of the judiciary and police to bring to justice perpetrators.

On 17 November, we met with women in Turkey to better understand the reality on the ground and the biggest issues for them. Joined by Filiz Kerestecioglu (HDP MP), Cevriye Aydin (Laywer) and Hilal Tok (Ekmek ve Gul) we hosted a webinar in which we discussed the lived experiences of women in the home and at work, as well as issues relating to judicial and police protections, the Istanbul Convention and the growing women’s movement. You can watch our subtitled webinar here or read an English transcript here:

Today, we published a Call to Action, which provides an outline of the latest developments on women’s rights in Turkey and a call to action to build international solidarity with the women’s movement in Turkey.  Read and share our Call to Action here:

What is SPOT calling for?

The UK Government must end its silence on the increasingly authoritarian and regressive regime in Turkey. Parliament should debate the issue of violence against women in girls in Turkey, and call on Turkish Government to:

• end its criminalisation of progressive and democratic opposition, including the women’s movement, and

• improve gender equality, prevent violence against women and girls, end the exploitation and discrimination of women in the workplace, and fund organisations supporting women.

• SPOT regularly releases news stories and updates. Help us by sharing updates with your organisations, followers, members and communities to increase the visibility of women fighting against gender quality and violence against women in Turkey.

• Trade Unions and branches can affiliate to SPOT and adopt motions on Women in Turkey. SPOT can also provide support to build links with women’s sections of trade unions in Turkey to amplify the voices of women workers in Turkey.

• Human Rights Organisations and Women’s Organisations can proactively engage with developments on women’s rights in Turkey and promote the demands of the women’s movement in Turkey through social media and innovative campaigning.

• Work with us to monitor trials of notable femicides, as well as female activists, political leaders, journalists and public figures. Close trial monitoring has in the past been shown to be effective in putting pressure on the Turkish judiciary to act lawfully.

• MPs, Mayors and Council Members can send video or written messages of solidarity to arrested and detained political leaders in Turkey.

• Write to the Government and your MP asking them to publicly condemn the AKP Government’s attacks on women in Turkey, call for the effective implementation of legislation to protect women from violence and take steps to address gender equality.

SPOT is ready to work with interested organisations and individuals to continue building solidarity with the Women’s movement in Turkey.