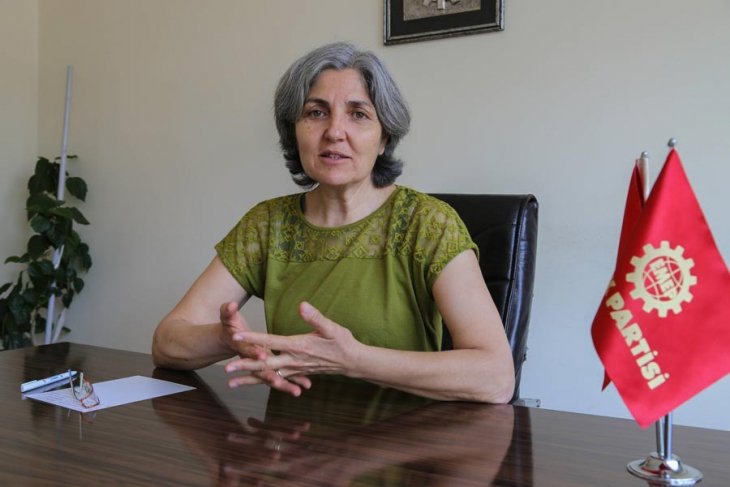 ’24th June is a critical point in strengthening the one-man regime. It is important that HDP surpasses the electoral threshold to stop this advance.’

Those that will be running against Erdoğan in the Presidential election and which parties will enter alliances in the parliamentary elections were decided within the last week.

As expected, a ‘People’s Alliance’ on parliamentary elections only has been agreed between Republican People’s Party (CHP), İYİ (Good) Party, Islamist Saadet Party (SP) and Democrat Party (DP); HDP has been left out of this alliance. The presidential candidates will be Selahattin Demirtaş and Muharrem İnce for Peoples’ Democratic Party (HDP) and CHP respectively. The attempts to an alliance between labour and democratic forces outside of the parliament have been unsuccessful.

We spoke to Selma Gürkan, chairwoman of the Labour Party (EMEP), regarding the current situation and their election policies. EMEP had recently called for an electoral alliance and a joint candidate between the forces of labour and democracy.

It has long been claimed that the ruling bloc would go to an early election. EMEP can’t take part in the elections to be held on 24 June. Were you unprepared?

An early election in Autumn 2018 was expected. However, faced with the problems brought on by the worsening economic and political conditions, the ruling block called a snap election. Hence, we were politically ready but it is the undemocratic legislation of party and elections laws that left us unable to take part in the elections.

A party must have representation in 41 cities, and two-thirds of the towns within those city limits, within the six months prior to an election. The Supreme Court can make undemocratic demands based on membership by address and each organisation to have held their congress before an election; hence it can make organisations and memberships void. Consequently, we had enough representation but these were reduced in numbers and EMEP was prevented from entering the elections. We continue to work towards overcoming these barriers.

You stated your support for Selahattin Demirtaş and HDP in the presidential and parliamentary elections respectively. How did you arrive at this decision?

We didn’t base our decision on which of the alliances to side with. We looked at the main issues: the crucial political issues in Turkey; the oppressive regime of the ruling block; the new legislation and bans curbing rights and freedoms; the democratic resolution of the Kurdish issue, which is a strong indicator of democratisation in Turkey.

24 June is a change of regime, a critical step in the establishment and strengthening of a ‘one-man, one-party rule’. We believe that HDP surpassing the electoral threshold is very important to halt this advance. Furthermore, oppression and legislation that denies the political will of the Kurdish people, and especially attempts to keep HDP out of the parliament are continued. The need for solidarity between Kurdish and Turkish people and the peaceful-democratic resolution of the Kurdish issue becomes more pressing by the day.

Does your support mean putting forward candidates through the lists of HDP? What was the framework in your discussions?

We believe as a party that forces of labour, democracy and peace should enter the presidential and parliamentary elections as an alliance around their immediate demands. We do not think it is right to put forward a candidate without such an alliance. It is also true that under the current conditions the basis for such an alliance is greatly restricted.

What do you think on HDP’s actions in this process? What are your thoughts on the criticism they receive: on their talking about the necessity for the unity of democratic forces but not attempting to achieve this in practice?

An alliance in these undemocratic election conditions is a crucial need. You would expect the forces of labour, democracy and peace to take a responsible stance in their practice. Furthermore, it is clear that there is such a demand and expectation from the people. We think that the HDP executive did not show determination and courage in organising and taking steps to achieve this; this is what leads to the criticisms. It is important that future discussions are held on a united, joint stand in the struggle for democracy.

You called on democratic forces for an alliance and a joint candidate but this did not receive support. Freedom and Solidarity Party (ÖDP) Executive member Alper Taş said that it was too late for this; stating that EMEP did not engage in their attempts for a joint candidate before the elections were called. Why didn’t you?

Rather than a democratic alliance, ÖDP persisted on a left-socialist alternative that did not involve CHP and HDP. We didn’t think this was the right approach; hence, we an agreement could not be reached in the negotiations.

In terms of being ‘too late’, it is still possible to gather around common democratic demands and mutual interests saying “we, the listed parties, will enter the election as a block within this framework.” There is still time for this; we did not miss the train yet.

On the other hand, it is clear that the election campaign will continue past 24 June as a struggle for democracy. This will not be an election about introducing candidates and asking for votes; we are in an election period of bans and obstructions, more importantly, we are under State of Emergency (OHAL) conditions and are governed through Statutory Decrees of law (KHKs). Thus, the president is exempt from electoral restrictions thanks to the latest KHK. Even that is not enough: partner of the ruling coalition, Devlet Bahçeli, openly threatened people who will support those candidates that need 100 thousand signatures to stand for office. Hence the clear need for democratic unity and alliances both prior to and after 24 June.

We will primarily try to expose the political regime this rulership is after; a campaign that aims to show workers from Turkish, Kurdish, Arab and all other backgrounds how a ‘one-man, one-party rule’ is dragging the country towards a catastrophe. We will try to expose the economic policies of Erdoğan and his governments: attacks on freedom of speech and the media, the organisation of the working class, political rights and freedoms. We will expose the policies of the government hostile to the people and the workers; policies that make life unbearable for women, youth and children. This is our main duty anyway and the election campaign will be a vehicle to deliver this. We’ll take this campaign to all factories, workplaces, universities and colleges.

What will your party do if the presidential elections go to a second round?

We need to see if there will be the second ballot; it is possible that there won’t. We have seen this government’s disregard for the will of the people – in previous elections on 7 June and 16 April -when it doesn’t get the desired results form the ballot box; they will try everything they can to hold on to power. Erdoğan’s threat to the people in saying “you attempted to go for a different path and we all witnessed the consequences” points to this. What did we see when Erdoğan and his government were unhappy with the results on 7 June; bombings, massacres, conflict, the devastation of cities and the loss of hundreds of lives… The rulership dragged the country into chaos and conflict and followed policies aimed at polarising the population. Hence, he is giving the message that consequences that are much worse could follow unsatisfactory election results.

It is highly likely that they will try to confiscate ballot boxes and cause chaos and disputes at polling stations. Therefore, while we attempt to strengthen democracy and create an alternative political choice, we should also have a perspective that takes necessary steps to protect ballot boxes,  that prevents the fraudulent sacrifice of the will of the people.

Consequently, the focus for us today will be a campaign that ensures the defeat of the ‘Presidential Alliance’ and a second round in the presidential election. We would like to support the same candidate as in the first; if the developments are to the contrary, our executive will review the situation and take necessary decisions.

POLARISATION CAN ONLY BE DEFEATED BY BREATHING LIFE INTO DEMOCRATIC DEMANDS; NOT BY CREATING ANOTHER RIGHTWING BLOCK

‘People’s Alliance’ was formed without the HDP; forming another rightwing, nationalist, conservative alliance against ‘Presidential Alliance’. What are your thoughts on this?

This means doing politics within the boundaries drawn by Erdoğan, especially for CHP. Despite secular and social-democrat elements within it; the real make-up of this alliance is clear. Political activity within boundaries determined by Erdoğan is what makes him so successful. One needs to look at Erdoğan’s election promises to decide on the alternative needed to be put forward against his alliance. What does Erdoğan say?: more democracy; more rule of law; more welfare and income. Against a rulership that admits that the lack of these, one must argue for a political regime that protects freedoms and rights. A second rightwing block will not disperse the polarisation and unite the people; that will be achieved by demanding democratic rights and political freedoms and meeting immediate economic and social demands.

‘ANYONE BUT ERDOĞAN’ IS THE WRONG ATTITUDE

We are against the presidential system but do not want the old parliamentary system back either. However, it is important to halt the political discourse represented by the values and political reaction of Erdoğan and the ‘Presidential Alliance’. ‘Anyone but Erdoğan’ would be the wrong attitude. The defeat of his alliance and the election of a new president will not mean that Turkey is over its problems; it would mean the defeat of a government that wants to establish a reactionary and fascist political regime. Of course, this would not be insignificant but will not mean a democratic triumph either.

Our struggle will continue for a political system where: the judiciary is free and democratic; the press is free; the governance of the country is determined by the will of the people; the election and political party legislations are democratic; a constitution that secures all of these is established. We continue to struggle for a system based on the rule of the working class. 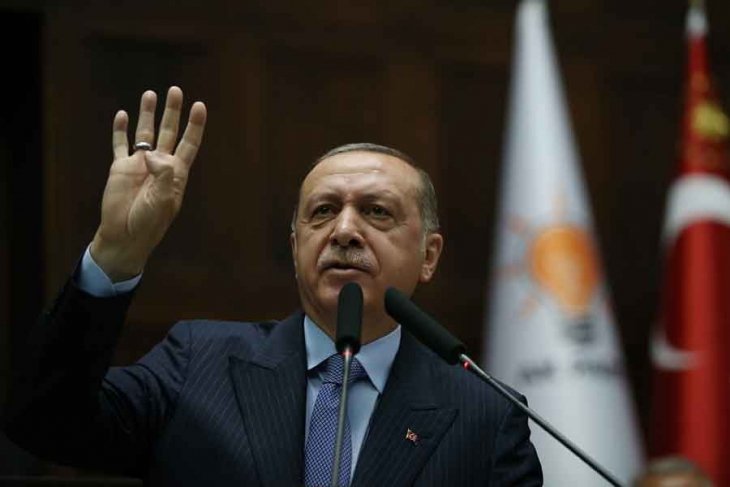 Next
Erdoğan’s manifesto in 5 points: The only pledge for women is ‘to shoulder the government’s burden’