Turkish President Recep Tayyip Erdoğan and US President Donald Trump had their first face to face meeting on Tuesday, 16 May. This is how political scientists Sinan Birdal, Sezin Öney and Fatih Yaşlı interpreted this meeting.

One of the difficult questions analysts were asked today was about the coverage of Erdogan’s visit to the White House by the American press. Alas, the picture on the front page of most newspapers show President Trump shaking hands not with Erdoğan but with Lavrov, Foreign Secretary of Russia. On the day of Erdoğan’s visit, the claim that Trump revealed highly classified information to Lavrov overshadowed this visit and deflated its non-existent significance even more. Prior to the meeting it was already known that Trump would not change his decision to arm the Kurdish People’s Protection Units (YPG) in Syria. His hands were also tied in relation to the two other issues Erdoğan wanted to discuss: the extradition of Fethullah Gulen and Reza Zarrab.

Trump may in fact want to hold onto these two issues as a trump card to control Erdoğan. Even if he wanted he is not in a position to give concessions on this as all his advisers with whom Erdoğan’s team were negotiating for the extradition for the past few months are under investigation by the Congress. Trump’s former National Security Adviser Michael Flynn and former Republican New York Mayor Rudi Guiliani are among those top Trump advisers who are accused of having illegal relations with Erdoğan’s administration.

The fact that the same advisers were in contact with the Washington Ambassador of Russia and the removal from office of the FBI chief who was investigating them caused increasing reactions against Trump. In this atmosphere, it seems there is no will to deal with Ankara’s gripes which would do no good but delay the freeing of Raqqa and Mosul from ISIS. Trump had already given a signal prior to Erdoğan’s visit by his decision to arm the YPG. This visit’s aim was to be photographed together, and in this, it was a diplomatic success one could say.

‘A meeting squeezed in the schedule’
Sezin ÖNEY, Political Scientist

First of all, the Trump-Erdoğan meeting lacks the diplomatic victory of previous presidential meeting between former presidents of US and Turkey, a meeting Ankara now downplays. It gives the impression that this meeting was squeezed in the schedule just before the lunch. Why so? Firstly, the Trump administration suffers from various complications such as a lack of coordination and that there is no “Trump doctrine” in terms of domestic and foreign policy. The priority subject for the US media is not the “Erdoğan -Trump meeting” as such, but Trump’s revelation of highly classified information to Russia…

This is not surprising because Trump loves gossiping in his daily life. But how could the leader of a country gossips with the representatives of a rival country? Obviously, his revelation of this information, sourced by Israel and without its permission, with Russia is so serious that it could even lead to his impeachment.

It could also be said that Trump, whose legitimacy is wounded and who allegedly acted against the fundamental democratic principles of his country, was not particularly pleased, in terms of his image, with being seen with a leader who is blamed these days to have led to a “flaw in democracy”.

When Trump meets with the other leaders of “anti-democratic” countries which are partners of the US he is not identified with them, but it is different with Erdoğan and his identification with him in the US and world media somehow creates a “negative mirror effect”.

During the US presidential elections, the Justice and Development Party administration and Erdoğan tied their hopes to Trump’s victory. This was to do with their expectations from teh Republicans in general and trump in particular. This was replicated by the reactions of pro-government media and intelligentsia when Trump won the elections. However, things didn’t go as planned, and Trump had a phone call with Erdoğan long after his election, and Erdoğan had to wait for a face to face meeting for even longer.

What happened just before the meeting was even more disappointing for Ankara. When the three high level representatives from Turkey, the chief of the general staff, chief of intelligence, and Erdoğan’s press secretary, were in the US for initial discussions, Trump signed a decree for arms aid to the YPG, which was also said to take part in the Raqqa operation against ISIS.

There was no serious protest against this from Ankara, and the big day came. It was only a meeting of 20 minutes followed by a lunch which was not promising to resolve all those accumulated issues.

Gulen’s extradition from US not likely

We will most probably get only backstage information regarding what had been discussed about Reza Zarrab.*

We can assume that arming the YPG and their lead position in the Raqqa operation will be accepted by Ankara, maybe with some sort of usual rhetoric for the sake of appearances. Time will show whether Ankara negotiated and got the go ahead for a military operation in Sincar or Syria to limit the Kurdish control. But it is not likely that Fethullah Gulen** will be extradited to Turkey.

* Reza Zarrab is a Turkey-based Iranian businessman who was arrested last year in Miami for money laundering and for bypassing US sanctions against Iran, claims also involve high level Turkish politicians.

** Fethullah Gulen is the US-residing cleric who was once Erdoğan’s ally but now is accused of being behind the failed coup attempt last July. 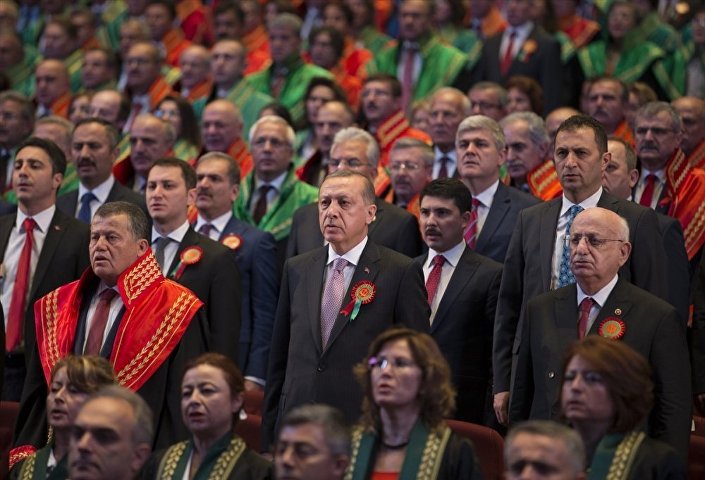