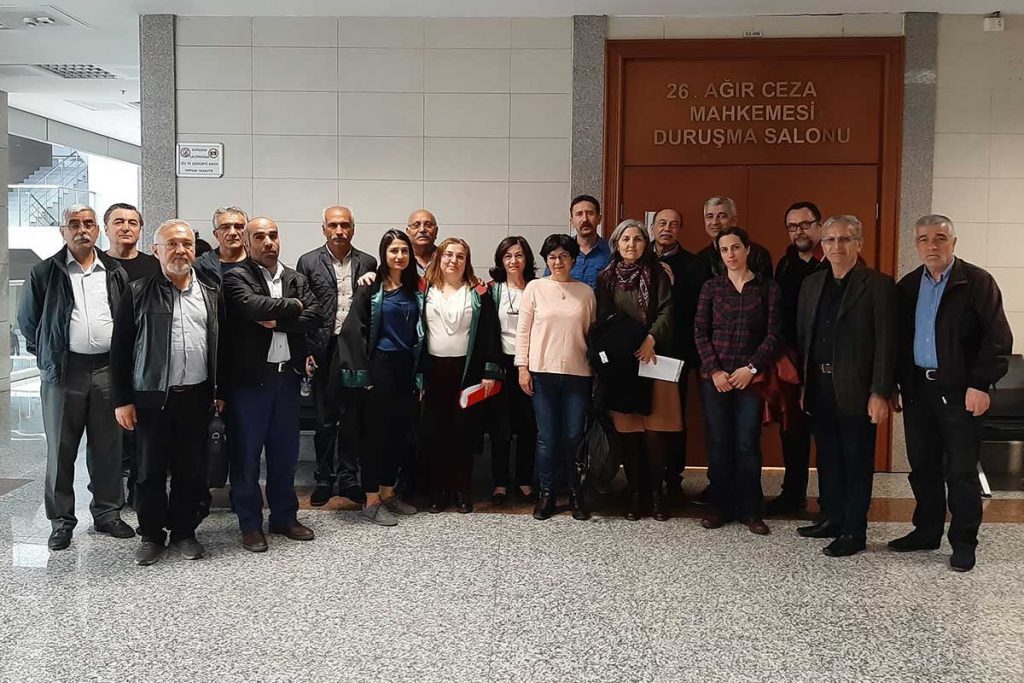 EMEP Chairwoman Selma Gürkan was sentenced on the count of ‘terrorist organization propaganda’ for her critics on the Afrin operation.

In a case brought for the speech she made in front of the judicial complex at the hearing of EMEP members who had been detained for handing out “No to war” leaflets, Labour Party (EMEP) Chairwoman Selma Gürkan was sentenced to ten months’ imprisonment and the penalty was converted into a 6,000 lira fine. Gürkan said, “This penalty is a penalty imposed on the call for peace, a penalty imposed on the right to engage in politics and a penalty imposed on freedom of expression” and she stressed that she would not stop expressing her thoughts.

Gürkan made a speech about the Afrin operation in front of the judicial complex at the first hearing of the trial in which Neslihan Karyemez and Bilal Karaman were detained for handing out EMEP “No to war” leaflets in Istanbul. The ruling hearing of the trial brought against Gürkan for this speech on the charge of “terrorist organization propaganda” was held at Istanbul Serious Crime Court No 26.

The hearing started with a repetition of the prosecution’s recommendations on the merits.

Making a statement contesting the recommendation, Selma Gürkan said, “Initially, voicing criticism against the Afrin operation by way of our party’s opinions is the exercising of our right to conduct politics. The right to engage in politics is essentially being prosecuted in this trial. With the right to engage in politics enshrined in the Constitution, this trial that has been started and is continuing is a violation of the Constitution, I wish to note this. Also, freedom of thought and expression is still under constitutional and statutory safeguard.”

Recalling the comment by organized crime leader Sedat Peker aimed at the peace declaration signatory academics, “We’ll spill their blood in streams. We’ll shower in their blood,” she continued:

“Despite being a clear call to threat and violence and making academics into a target, it is safeguarded to the extent of being treated as freedom of speech. Another example: Presidential Communications Chair Fahrettin Altun even defended the act of punching Kemal Kılıçdaroğlu in the attempted lynching in Çubuk saying, ‘The right of protest is under constitutional safeguard’ and treated it as belonging to the democratic plane. Also, attempted lynchings of our Kurdish citizens have been considered to be ‘protests by sensitive citizens.’ We have witnessed the making of similar assessments countless times by members of the ruling party. Now we are being prosecuted for finding a foreign policy decision of the government to be wrong and criticizing it. I imagine that in no democratic precedent are dual standards acceptable in the implementing of political rights and the freedom of thought and expression. If we as a political party are unable to express our opinions and criticise government policies, we probably cannot speak of democracy and freedom.”

Gürkan summed up by saying, “I ask for the immediate ending of this trial that should actually never have been initiated with my acquittal, taking account also of the reasons my lawyers will submit.”

The lawyers then made statements contesting the recommendation. Saying it was contrary to Article 7/2 of law number 3713 and in short Articles 1, 10, 25, 26, 28 and 38 of the Constitution, Yıldız İmrek, Attorney-at-Law, said, “We have an objection of unconstitutionality. We call for the case to be remitted to the Constitutional Court.”

The application was dismissed on the grounds of non-fulfilment of the conditions.

In turn, Devrim Avcı, Attorney-at-Law, said, “A rote application has been made for a penalty contrary to the law and statute. Your use of abstract expressions is contrary to criminal trial principles. The recommendation amounts to an imputing of intentions on the part of the prosecutor. My client’s right to conduct politics is being obstructed through this trial. We ask for a ruling to be passed acquitting my client.”

For his part, Mustafa Söğütlü, Attorney-at-Law, spoke as follows:

“It is impossible to concur with the prosecutor’s recommendation. I will start by criticizing the recommendation. The recommendation has become the ruling party’s bulletin. The recommendation should be independent. Prosecution and judges, you are bound by the Constitutional Court. My client’s freedom of expression is being impeded. Political parties’ activities are safeguarded. Impeding party activities amounts to a crime. It is natural for the chairs of political parties to make statements. My client made a speech in the language of peace in opposition to the Afrin operation. Defending peace cannot be deemed a crime under any modern law.”

A one-year jail sentence was handed down in the judgment following the taking of a recess. In consideration of Gürkan’s social relations and conduct in the course of the proceedings, it was reduced to ten months and converted to a 6,000-lira administrative fine.

GÜRKAN: THIS PENALTY WAS IMPOSED ON THE CALL FOR PEACE AND THE RIGHT TO ENGAGE IN POLITICS

The statement made by the Labour Party (EMEP) about the penalty handed down to Chairwoman Selma Gürkan said, “There was a wish to impede the right for a political party to engage in politics and to punish the call for peace.”

The statement said, noting that EMEP Chairwoman Selma Gürkan had made a brief speech on 27.02.2018 in front of the Istanbul Judicial Complex prior to the trial in which party members were being prosecuted for handing out the leaflet stating “No to the Afrin Operation. We want peace not war” and had criticized the government’s policies of war and voiced the call for peace, “A trial was initiated against Selma Gürkan for this speech on the charge of making terrorist organization propaganda. A ten-month jail sentence was handed down at the 24.04.2019 hearing at the conclusion of the trial conducted by Istanbul Serious Crime Court No 26 and the jail sentence in question was converted to a fine. We will lodge our objection to the ensuing sentence with Istanbul Regional Court of Justice and will appeal it.”

The statement, stressing that the case had no legal basis and the prosecution indictment had been compiled entirely with political arguments and resembling a government declaration, commented as follows: “Our Chairwoman Gürkan’s speech was construed as an attempt to disrupt the policies of war and the creation of a charge through imputing intention was attempted. Istanbul Serious Crime Court No 26, for its part, undersigned a legal travesty in passing sentence in the case compiled under this indictment. By means of this sentence imposed on our General Chair there was basically a wish to impede a political party’s right to engage in politics and the call for peace was punished. With the general chair of a political party punished for a speech with no violent content, organized crime bosses who openly speak of killing people, talk of bathing in academics’ blood and continue with threat-laden pronouncements following this rhetoric remain at large within society.”

“THERE IS A WISH TO TAKE SOCIAL POLARIZATION TO EXTREME LEVELS”

Noting that hate speech had continued unabated since the 31 March elections and the seeds of rancour and enmity were being sown by the political rulers themselves, the statement said, “Furthermore, the chair of a political party, Kemal Kılıçdaroğlu, suffered an attempted lynching in Ankara, while the perpetrators were released virtually as heroes. In these days we are living through, such punishments are not sufficed with and there is a wish to take social polarization to extreme levels by singling people out.”

“WE WILL NOT ABANDON OUR FIGHT FOR JUSTICE, PEACE AND FREEDOM.”

Noting that even equating opposition to policies of war by itself with being a “terrorist” drove home the point the country has reached, the statement noted, “The need of Turkey’s peoples and this country’s workers and wage earners is peace, freedom and democracy. With its persistence in punishing the call for peace, the position the judiciary is taking, conversely, will go down as a black mark in history. We thus state that we do not accept the penalty imposed on our party’s Chairwoman Selma Gürkan and attribute no meaning or value to it legally. We will not abandon our fight for justice, peace and freedom.”

Next
END TURKEY’S ATTACKS ON DEMOCRACY AND MILITARY AGGRESSION NOW