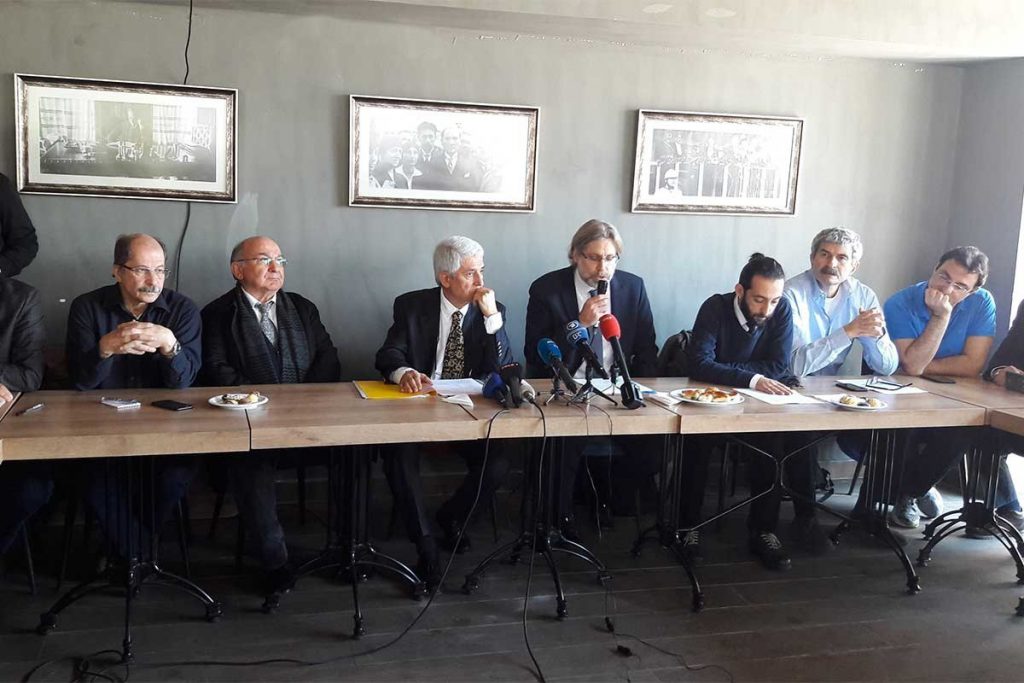 8 Cumhuriyet staffs set to go back to jail said, “May things go well for us on the inside and you on the outside.”

Those sentenced to less than five years in the Cumhuriyet newspaper trial and whose sentences have been upheld by the appeal court are now expected to go to jail. The newspaper’s former staffers Musa Kart, Kadri Gürsel, Güray Öz, Hakan Kara, Önder Çelik, Emre İper, Bülent Utku and Mustafa Kemal Güngör will go to jail. Today, the journalists made statements accompanied by their lawyers at the İstanbul Bar Association.

MUSA KART: I EXPECT AN APOLOGY

The newspaper’s former cartoonist Musa Kart was the first to address the conference. Saying that he had been a cartoonist for forty years, Kart said, “In spite of everything, I have felt no doubt about the correctness of my choice. I now expect an apology. By now everyone knows that they jailed us to create a climate of fear in the country. My colleagues rebutted the charges against us in the historic defences they made before the first-instance court. Yes, how sad that this period will be remembered for its lack of hearings and defences. Let’s give it its due. If being tried without hearing and defence is not a comedy, what is? We at Cumhuriyet are people who believe in democracy, secularism, the rule of law and living together. Heads held high, I will go back to jail together with my colleagues who hold their professional integrity above all else. I embrace everyone who has stood at our sides from the outset.”

“THE LAW OF THE SUPREME WAS DEFENDED”

For his part, former Cumhuriyet newspaper employee Mustafa Kemal Güngör, Attorney-at-Law, said of the Cumhuriyet trial, “It was a trial that murdered the law,” and added, “I was prosecuted in this trial as a lawyer of 34 years’ standing. We are up against a ruling that murders the law. Those in power had a sentence that they made particular recourse to in the 2010 constitutional referendum: ‘We will bring about the supremacy of the law and not of the Supreme.’ But here the law of the supreme was defended. This is a political, not legal, trial. It intimidates the rest of the press and journalists and other opposition segments of society. It says let nobody write and nobody criticize. If this is done, the judiciary immediately moves into action. The indictment and court judgment would have it that we knowingly and willingly aided a terrorist organization without being a member. And also three organizations at the same time. How did we commit this crime? With the news that appeared in Cumhuriyet as a whole. Those who are trying us and are having us tried to know full well that we committed no such crime. But look at how odd and portentous it is when those on trial are we who for forty years warned of the “FETO” truth.”

Saying that press freedom had been destroyed with these punishments, Güngör continued, “Trust me, I am lost for words in the face of a judgment that murders the law. I grieve for my poor and beautiful country. The freedom of the press and expression was destroyed from start to finish in this trial. The principle of personal liability in criminal law has been destroyed. Our going to prison will not just be contrary to the law, but contrary to the Constitution and statute. The first-instance court found the Cumhuriyet newspaper staffers guilty. The Regional Court of Justice upheld our convictions. Our application for appeal was dismissed in a two-sentence judgment. The state will say ‘sorry’ to us years later. Is this what justice is about? Speedy trials are supposed of the essence and the Court of Cassation is supposedly heavily burdened with cases. What is to come of our burden, the burden of those who have been robbed of their lives? We noted all these things in our statement of appeal. But the legal system paid us no heed. May things go well for us on the inside and you on the outside. Farewell!”

Following the speeches, the journalists fielded questions from the press. To the question, “Cumhuriyet’s management has changed. Are you still getting support?” Musa Kart replied as follows, “It is not playing a very positive role in reflecting what is going on in the media. I do not think our trial is reflected in the terms that it warrants. I would also like to say with reference to our paper that it must be accepted that the current newspaper management also has a degree of responsibility. I think it worth saying that a praiseworthy picture of solidarity has not succeeded in emerging.”

“EXECUTION WILL HAPPEN ANY TIME”

Tora Pekin, Attorney-at-Law, gave information about the trial process. Saying, “In view of the latest developments that took place in the Cumhuriyet newspaper trial last week, we felt the need to hold such a meeting,” Pekin said, “As you know, the appeal court undertook its procedures to finalize the judgment. We have thus now come to the execution stage of the prison sentences. Istanbul Serious Crime Court No 27 will conduct its own correspondence and the commencement of execution will happen any time once the judgment has been sent to the executory public prosecutor’s office. This means that eight of our fourteen colleagues who have been sentenced, Güray Öz, Musa Kart, Hakan Kara, Önder Çelik, Kadri Gürsel, Bülent Utku, Mustafa Kemal Güngör and Emre İper, will go back to jail.”

Pekin noted, “Looking at the judgment, we see that the proof of guilt is merely the reports we made, the headlines we ran and a few articles by columnists. On the basis of these publications, we have been adjudged to have aided three terrorist organizations at the same time without being a member. Six of the sentences handed down out of fury with independent journalism and true reporting departed from the lower limits and sentences of from 3 years and 9 months to 8 years one month and 15 days were imposed. There is no precedent for this. We objected to this judgement in a 200-page statement. Penal Chamber No 3 of Istanbul Regional Court did not even reply to the request for a hearing. It dismissed our objections without a single sentence citing any grounds.”

Also briefly touching on Article 220/7 of the Turkish Penal Law, Pekin commented, “The European Court of Human Rights stresses that this article is vague and for this reason has no statutory character. The Venice Commission has emphasized that this article should be rescinded in full and, if not, should at least not be applied to the freedom of expression and freedoms of assembly and protest. However, unfortunately, what is written and drawn by journalists who criticize the political rulers or even by citizens who enter a few lines on social media continues to be considered a crime in this respect by our prosecutors and judiciary. We point once more to the need for Article 220 of the penal code to be reworked legally.”

“JOURNALISM IS NOT A CRIME”

Pekin finally said the following: “Even if we are here to give a reminder of the Cumhuriyet trial, what is really being told is the story of press freedom in Turkey. The IPI put the number of detained journalists at 155 in February. Every day, we witness a journalist being arrested, a search being conducted at their home and their being accused of organization membership or aiding an organization. According to the most recent Reporters without Borders (RSF) report, we are anchored in 157th position in the world press freedom league table. 95% of the media is under the ruling party’s control. The Cumhuriyet trial and the return to the jail of our colleagues for a non-existent crime is just an important detail in this horrific picture. While, in fact, free news, free information and free comment are indispensable for a democratic society. We thus call on the public to stand up for journalism and journalists and on the political rulers to respect the freedom of the press and expression. Journalism is not a crime.” 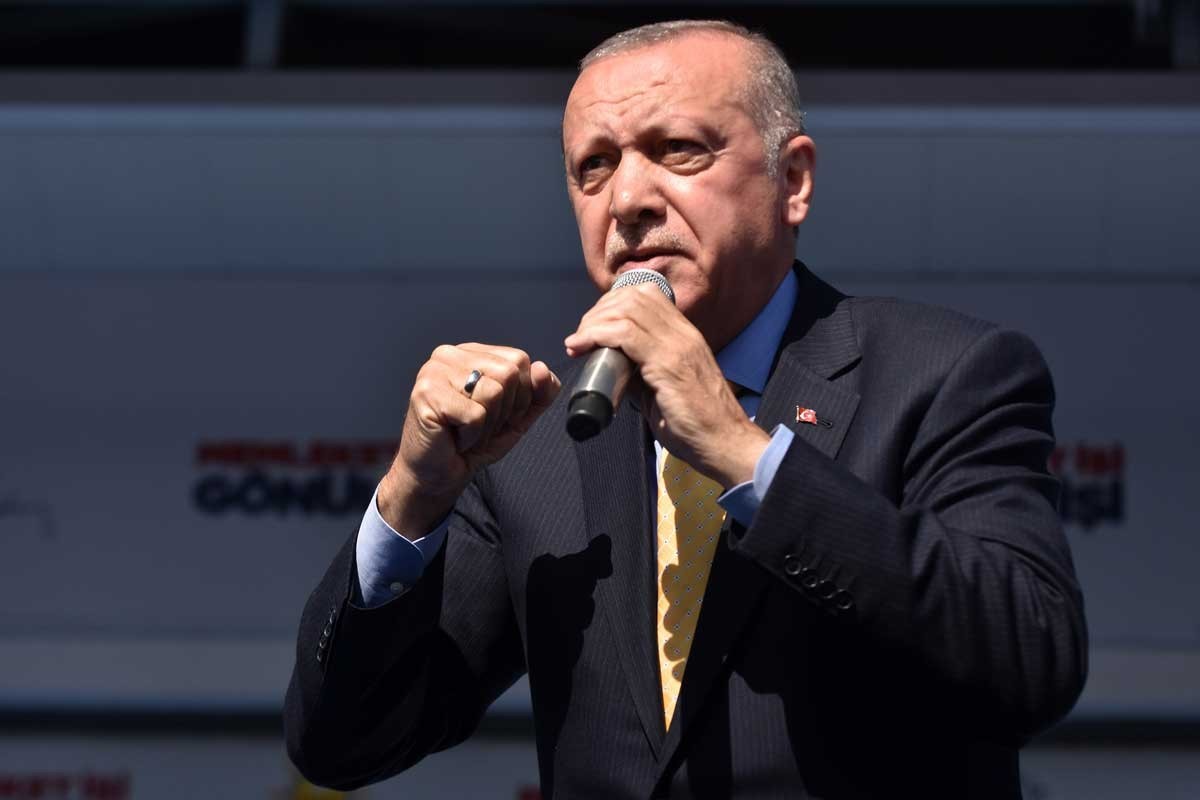