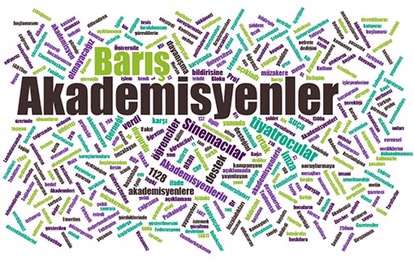 In the face of rising authoritarianism and right-wing populism, academic freedom is under severe threat in contemporary Turkey. Governmental repression on academics became all too apparent when the Turkish President, Recep Tayyip Erdogan, instigated a campaign of persecution against academics – Academics for Peace (BAK) – who signed a peace petition in January 2016. The petition, which called on the Turkish government to bring a halt to the destruction and civilian killings being carried out in Kurdish cities and towns, was signed by more than 2000 academics.

As of 2017, more than 700 BAK academics have been subject to dismissal, disciplinary actions, criminal prosecution, or even detention. The repression has escalated beyond BAK academics in the aftermath of the failed military coup in July 2016, with thousands of academics being fired, or forced to resign, and hundreds being legally detained. More than 20 universities have been closed, and their students forced to find alternative places. In addition, since January 2016, hundreds of academics and scholars have been displaced, either forced to leave Turkey or choosing it as the only viable option.
This half-day conference will address the current threats to academic freedom in Turkey, in the context of the current global political climate. We aim to start an urgent conversation about academic freedom and freedom of speech, increasingly stifled due to neoliberalism, authoritarianism, and the so-called “war on terror” in many parts of the world, from the US to India, Latin America to Egypt. We invite the university community, journalists, activists, politicians, and all concerned individuals to join us in this effort to defend academic freedom and freedom of speech and think about ways to organise solidarity to support scholars and journalists at risk.

Caroline Stockford, Chair of the Translation, Linguistic Rights and Writers in Prison Committee, Wales PEN Cymru
Maria Chichtchenkova, Protection Coordinator for Europe and Central Asia, Front Line Defenders
This event is organised by BAK-UK (Academics for Peace, United Kingdom) with the support of Birkbeck School of Law.
For more information go to the Facebook event: https://www.facebook.com/events/1392490894125441??ti=ia

Next
Why Should We Support The “No” Vote In Turkey’s April Referendum?