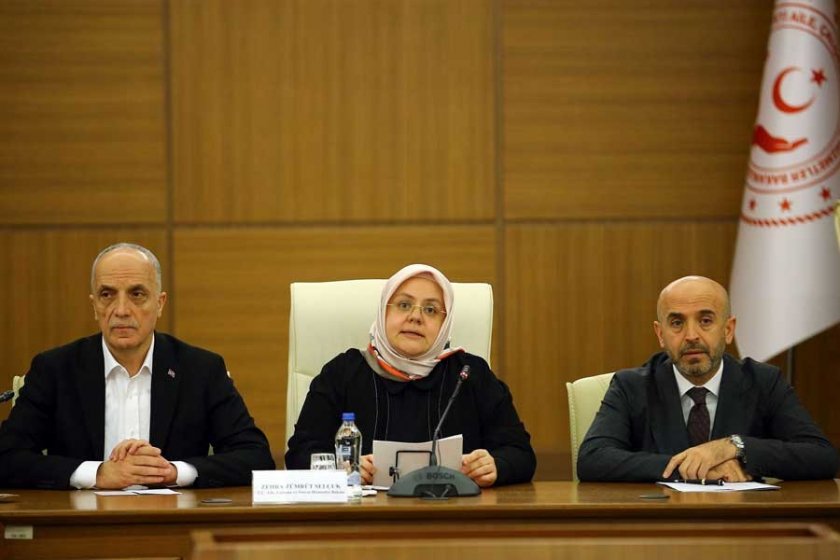 The Minimum Wage Determination Commission has convened for the fourth time to set the minimum wage effective in 2019.

The Minimum Wage Determination Commission has set the minimum wage, directly affecting ten million workers. The minimum wage has been set at 2,558 lira gross and 2,020 lira (381 dollars) net in 2019.

Minister of Family, Labour and Social Services Zehra Zümrüt Selçuk announced that the decision had been taken unanimously.

Confederation of Turkish Trade Unions Chair Ergün Atalay said at the end of the meeting, “We had a threshold and our threshold was getting past two thousand lira. We wanted a wage that would support human existence. Doing so, we faced no end of accusations. With us forwarding our minimum wage demand, they said, ‘The Confederation of Turkish Trade Unions Chair is calling people onto the street.’ What was I to do, then? Call them out onto the beach? When I have an issue, when I am concerned, I will articulate this within the bounds of the law without causing mayhem. I thank everyone who put in an effort, the president, minister, employers’ representatives and the colleagues on the commission. Is it a fantastic wage? No, but it is an acceptable wage. It is the poor and needy who are affected; perhaps we did not make them one hundred per cent happy but we did so by eighty per cent with this decision.”

According to an announcement made by the Ministry of Family, Labour and Social Services, the meeting chaired by Minister Zehra Zümrüt Selçuk started at 10 o’ clock in the ministry building.

Confederation of Progressive Trade Unions Chair Arzu Çerkezoğlu commented to Gazete Duvar. Çerkezoğlu said, “It was announced to be 2,020 lira and for us, this is a low amount. We the Confederation of Progressive Trade Unions say the minimum wage needs to be 2,800 lira to be a living wage. We call on the minimum wage to be adjusted for the loss in terms of inflation and national income. Considering the crisis conditions under which we are entering 2019, the amount of 2,020 is not an adequate amount in view of we working and salaried people’s working and living conditions as we embark on 2019. There is an increase in the rate of inflation but it is not only inflation that is important for us but the purchasing power of and share of national income obtained by the minimum wage. In a country where the hunger level is 1,900 lira and the poverty level is above 6,000 lira, it is impossible to consider 2,020 lira to be sufficient.”

With the new wage that has been set directly affecting ten million workers, it will also act as a benchmark for collective agreements to be made in 2019. The minimum wage is currently in force at 1,603 lira along with the minimum subsistence allowance.

A minimum-wage worker also participated for the first time at commission meetings this year.

The highest minimum wage in the world is in force in Australia at 28,768 dollars per year. (EVRENSEL DAILY)