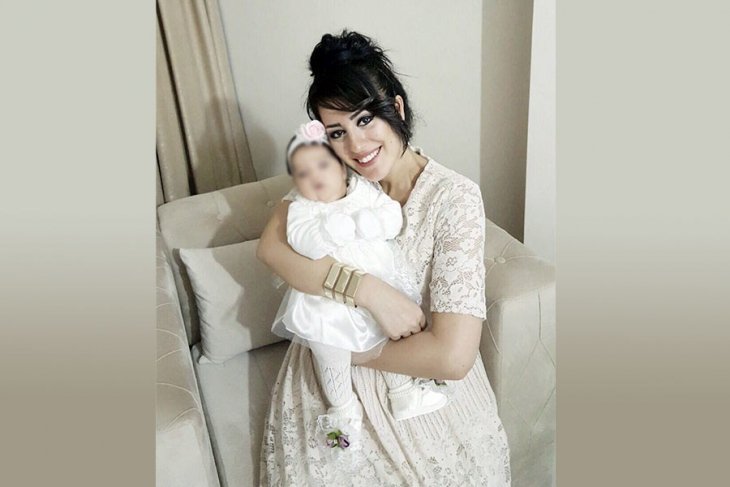 A school teacher, Ayşe Çelik, who said ‘do not let children die’ was sent to prison with her baby daughter in the southeastern province of Diyarbakır.

THE CIRCUMSTANCES OF THE CASE

On 08.01.2016, a school teacher by the name of Ayşe Çelik called a popular talk show presented by Beyazıt Özturk on Kanal D, one of the most viewed non-state TV channels in Turkey.  Ayşe Çelik talked about the clashes that had been raging for months between Kurdish militants and Turkish security forces in Diyarbakır, the largest city of the mainly Kurdish southeast. She pleaded for more media attention to killings and other human rights abuses carried out against civilians across south-eastern Turkey and she said:

“Are you aware of what is going on in the southeast of Turkey? Unborn children, mothers, people are being killed here. You should say stop! There are miserable people who are glad to hear that children are dying. The things happening here are reflected so differently on TV screens or in the media. Do not remain silent. As a human being, have a sensitive approach. See, hear and lend us a hand. It is a pity, do not let those people, those children die; do not let the mothers cry anymore. I cannot even speak over the sounds of the bombs and bullets. People are struggling with starvation and thirst, babies and children too. Do not remain silent.”

The host of the program, Beyazıt Öztürk, had the audience applaud her by saying: “We are trying our best to make it heard. Your words have been a lesson for us. We will continue to do more. Hopefully your wishes for peace will be realized as soon as possible.”

On 20.04.2016, the Bakırköy Public Prosecutor filed a bill of indictment against Ayşe Çelik and Kadir Tunali, an executive director at Kanal D who was responsible for the show. Ayşe Çelik was charged with disseminating propaganda in support of PKK under Article 7 (2) of the Law on Prevention of Terrorism (the Law No 3713), and Article 53 of the Turkish Penal Code on account of her speech on the live broadcast of Kanal D. The public prosecutor submitted that the following passages in the speech constituted propaganda in favour of an illegal organisation:

“Are you aware of what is going on in the Southeast Turkey? Unborn children, mothers, people are being killed here. You should say stop. The things happening here are reflected so differently on TV screens or on the media. Do not remain silent. As a human being, have a sensitive approach. See, hear and lend us a hand. It is a pity, do not let those people, those children die; do not let the mothers cry anymore. People are struggling with starvation and thirst, babies and children too. Don’t remain silent. “

At the material time, Article 7(2) of the Law on Prevention of Terrorism read as follows:

“Any person who disseminates propaganda in support of a terrorist organisation shall be liable to a term of imprisonment of between one and five years.”

The Bakırköy Public Prosecutor decided not to prosecute against television show host Beyazıt Öztürk on the ground that ‘Beyazıt Öztürk did not know that the guest on the phone would go beyond the agreed extent of the conversation, later lost control of the course of events in the programme and there was therefore no solid evidence pointing to any deliberate action by Özturk.’

In support of the indictment, the public prosecutor submitted video records of the television show, report by experts examining the video records, the statement of the defendant to the police, decision 2016/103 of the Supreme Council of Radio and Television (RTUK) which took action against the host of the programme Beyazıt Öztürk, and Kanal D for violating TV broadcasting regulations.

On 23.08.2016, the first hearing was held at Bakırköy 2nd Assize Court where Ayşe Çelik made her defence submission. She was represented by Mr Mahsuni Kahraman, a lawyer practising in Diyarbakir. She stated that she stood behind her words and argued that, this case infringed her right to liberty and security and her right to freedom of expression .The defendant submitted that the accusation pursuant to Article 7(2) of Law No. 3713 had been in breach of Article 10 of the European Convention on Human Rights (ECHR) because her speech had not contained any elements that could be considered an incitement to violence. During the hearing the defendant denied having committed any criminal offence. The defendant contended that she had not intended to disseminate propaganda. She also thanked all scientists, politicians, intellectuals, artists and lawyer friends, who believed her innocence and embraced her words.

Ayşe Çelik received a wide support from the human rights community including scientists, politicians, intellectuals, artists, and lawyers. 38 individuals, for instance, signed a copy of Ayşe Çelik’s statement, denouncing themselves to the Bakırköy Public Prosecutor as ‘accomplices of Ayşe Çelik in this crime, if her words indeed constitute a crime.’ The public prosecutor accused them for the same act.  They stated in their joint defence at the court that, “Neither Ayşe Çelik, nor us are on trial in this case; a peace demand and the truth is on trial. Humanity and conscientious sensitivity can not be punished. We have protected the cry of Ayşe Çelik, we have joined the voice of the truth. This voice can not be a crime.” The defendants, who were represented by a number of lawyers, also submitted their written statements to the court setting out the principles of protection of the right to freedom of opinion and expression.

On 01.03.2017, the public prosecutor filed his submissions on the merits. He sought the defendant’s conviction for the offence with which she was charged. The prosecutor demanded a prison sentence for Ayşe Çelik based on Article 7(2) of the Law No. 3713, claiming that she had ulterior motives in calling the show, and that she acted in line with PKK’s objectives, trying to portray Turkish Armed Forces as being responsible for what was going on in the southeast. The public prosecutor further noted that Ms. Çelik, in her expression ‘Do not let children get killed’ used the same language as the PKK, and that she aimed to justify the actions of the PKK by portraying the military operations against the PKK as ‘actions causing the death of innocent civilians.’

The public prosecutor demanded acquittal for Kadir Tunali and 38 other defendants for charges of ‘disseminating propaganda’ under Article 7(2) of the law No. 3713 due to lack of evidence.

In their final defence submissions, relying on international human rights standards including freedom of opinion and expression and fair trial rights, the defence lawyers demanded acquittal of all defendants.

On 26.04.2017, at the end of the fifth hearing, the Bakırköy 2nd Assize Court convicted the defendant Ayşe Çelik of disseminating propaganda in support of the PKK under Article 7(2) of Law No. 3713 and sentenced to a total of 1 year 3 months in prison.

In its reasoned decision, the court first gave a summary of the defendant’s defence submissions, the public prosecutor’s observations on the merits of the case and the evidence in the case file which included the defendant’s statements to the police and the judge, reports by experts on the examination of the video records, the defendant’s identity documents, and a document showing that she had no previous criminal record.

Bakırköy 2nd Assize Court further noted that during the television broadcast , the defendant’ s speech had subsequently turned into propaganda in favour of the PKK and in her expression ‘Do not let children get killed’ she had used the same language as the PKK, and that she aimed to justify the actions of the PKK by portraying the military operations against it as causing the death of innocent civilians. The court noted that those who disseminated propaganda in favour of the PKK were expressing their support and approval for the PKK, whose methods were those of terrorism and violence. On the arguments by Ayşe Çelik, the court contended that the expressions she had used had gone beyond the limits of freedom of expression in that they had undermined the rights of the official authorities and endangered social peace and public order. The court considered that the defendant had acted on behalf of the illegal organisation PKK, acting in line with their goals and activities, and that she should therefore be punished for disseminating propaganda in favour of the illegal organisation .The court acquitted the defendants including Kadir Tunali and 38 others on lack of evidence.

On 02.04.2017, the defendant’s lawyer appealed before Istanbul District Court of Appeal. He stated in his appeal that Ms Çelik’s conviction pursuant to Article 7(2) of the Law no. 3713 had constituted a violation of her right to freedom of expression which is protected under Article 10 of the ECHR. He continued by arguing that “[With this case] not only freedom of expression but freedom of thought is being prosecuted. … The violation went beyond the freedom of expression …. Because, not her words but rather the intention behind her words has been questioned [by the judicial authorities]. Through entering into a discussion about what she might have meant and aimed for with her expression, her thoughts have been prosecuted and a hypothetical decision has been made on that ground.”

On 20.04.2018, Ayşe Çelik was sent to prison with her baby daughter in the south eastern province of Diyarbakır after the court overturned her lawyer’s request for an additional period of delay. 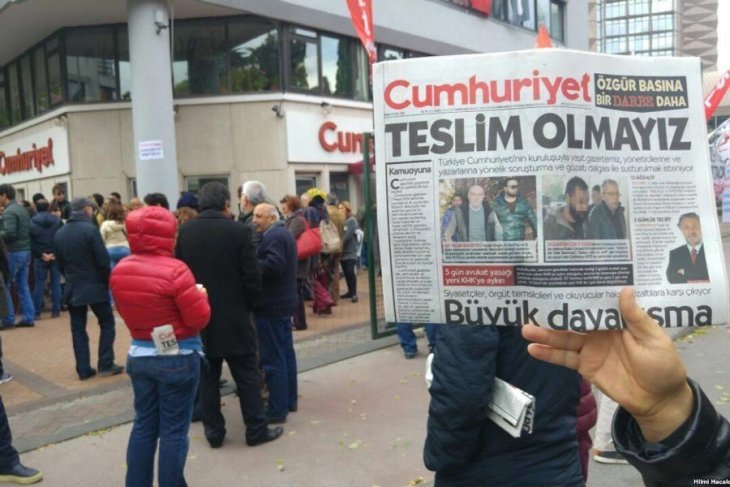 Next
Cumhuriyet’s 14 journalists and executives sentenced to jail